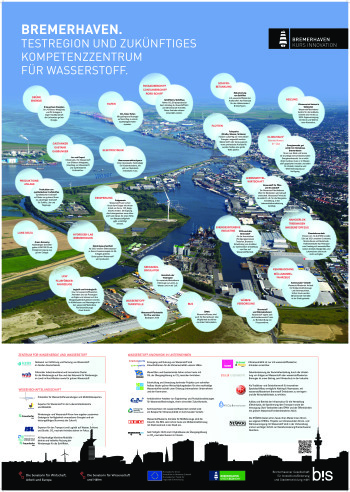 Hydrogen is one of the most important forms of energy for a climate-neutral future. It plays a significant role for Bremerhaven as a centre of climate research, with its flagship Klimahaus and as a leading location for offshore wind energy in the further development of trade and industry, the Green Economy and as a location for science.

Bremerhaven is pursuing the goal of becoming a test region and competence centre for hydrogen and fuel cell technologies in the north. With offshore wind energy, we have already proven that we have the capabilities for this. The project “Hydrogen – Green Gas for Bremerhaven”, which is being funded with € 20 million by the State of Bremen and EFRE, is the initial spark. By mid-2022, an electrolysis test field will be built on the site of the old Luneort airport to test the interaction between the electrolyser and the wind turbine. Applications for hydrogen are being developed concurrently. Bremerhaven’s first hydrogen filling station will be built in 2021 on the property of the Shell petrol station at the Wulsdorf motorway exit.

Already today, Bremerhaven offers comprehensive scientific competence in the field of hydrogen, with capabilities which run right through all the resident scientific institutions. In recent years, a wide range of project experience has been gained, e.g. in the use of fuel cells on ships.

Companies in Bremerhaven also see great potential here. Ideas are being put forward for the use of wind-based hydrogen. In municipal transport and logistics, serious consideration is being given to the procurement of hydrogen-powered refuse collection vehicles, street sweepers, buses and trucks, and also forklift vehicles.

Hydrogen will also play a major role as a climate-neutral propulsion system in shipping and on non-electrified railway lines. The regional railway company EVB will be using fuel cell-powered railcars on the line between Buxtehude and Cuxhaven from 2021 onwards, and so we will be able to experience the technology in action.

As a port location with the maritime industry as its economic mainstay, the construction of hydrogen-powered ships, the import and export of hydrogen and the bunkering of ships will be a major focus of developments.

All of these activities will open up application areas and new business prospects for our local companies. For non-resident companies, Bremerhaven will become an attractive location for the Green Economy.

With its Regional Management for Hydrogen, BIS is contributing to this development and thus fostering the establishment of a hydrogen industry in Bremerhaven. The City’s activities are coordinated and focused.

Centre for wind energy and hydrogen

H2BX e.V.
Network for the introduction and utilization of hydrogen in Northern Germany. www.H2BX.de

The WAB Working Group Hydrogen is jointly organized by H2BX and WAB. Here, companies and institutions from both sectors exchange information and push forward projects and initiatives to interlink, advance and implement the technologies. https://www.wab.net/aktivitaeten/arbeitskreise/windkraft-wasserstoff/

Platform for education and acceptance

Klimahaus
Since 2009, this flagship centre has attracted almost 6 million visitors to explore topics of climate and climate change, and is considered a pioneer in climate communication. With new offerings, the Klimahaus will raise awareness for climate protection and the energy turnaround even more in the future. It is a consortium partner in a national BMBF project on energy transition. www.klimahaus-bremerhaven.de

TTZ Bremerhaven
Experts for hydrogen in the food industry and mobility. www.ttz-bremerhaven.de

Fraunhofer IWES
Wind energy and hydrogen know-how put together: increased availability of renewable energies and an efficient power grid of the future. www.iwes.fraunhofer.de

ISL
Experts für transport and logistics on water, rail and road. The focus in on CO2-neutral drives. www.isl.org

Bremerhaven Bus
Since spring 2020, three hybrid buses have been in operation as a transitional solution to CO2-neutral buses. www.bremerhavenbus.de

Brüssel & Maass
Climate neutrality can only be achieved with hydrogen-bases drives. www.bruessel-maass.de

Green Fuels
Bremerhavener start-up with fresh ideas for the use of wind-hydrogen, logistics and mobility.

EnPro
Ambitious provider of engineering and production services for hydrogen technology as a future market with meaning. www.enpro-bhv.de

Weser Ferry
The Weser Ferry and MS Geestemünde are already using GtL (gas to liquids) as a transitional solution to CO2-neutral propulsion. www.weserfaehre.de

In the technological application of hydrogen as a propulsion system, especially in the sector of mobility, logistics and shipping, a large discrepancy is seen between what is publicly communicated as a possible field of application and what is actually possible at present. Consequently, this is where the greatest need for research, development and testing of the application technology exists, without which the production and application of hydrogen will be neither sensible nor economically viable in the future.

Bremerhaven covers broad parts of the mobility, logistics and shipping sector. It offers numerous competences in the respective application areas of the maritime economy and road transport, both in commercial enterprises and in research institutions. In addition, the city’s unique location on the North Sea, its size and the recurring traffic flows provide the optimum conditions for testing hydrogen-powered vehicle prototypes on land and on water.

The infrastructure for long-term testing of prototypes under real-world conditions is being built for the test region. In addition to the construction and expansion of laboratories and workshops, the planned infrastructure includes a technical centre with demonstration plants suitable for hydrogen applications, test stands for plant systems and the provision of measuring systems as well as measuring equipment to enable measurements and tests to be carried out under controlled and standardized conditions. Long-term testing of prototypes also requires the corresponding maintenance facilities in vehicle workshops, together with shipyards capable of handling fuel-cell and hydrogen-based systems. Existing workshops and shipyards will be converted for this purpose. The infrastructure is supplemented by the development of software tools for the simulation of plant systems (including balance of plant) that support the development of products and system integration.

The development of components and systems for mobility applications up to market maturity will thus be sustainably supported.

The test region will efficiently promote the ramp-up of hydrogen technologies in mobile hydrogen applications in Germany and strengthen both the system suppliers and the component supply industry.

Seawater electrolysis  a technological step ahead for Bremerhaven

The technology of seawater electrolysis is showing the way forward. It will contribute to a more cost-effective and energy-efficient production of hydrogen, especially at coastal locations, on islands, in offshore wind farms and on offshore platforms. In addition, a shortage of drinking water is expected from the middle of this century, so that the use of such a vital resource for hydrogen production is not justifiable in the long term.

For Bremerhaven as a business and port location, the development of a seawater electrolyser and its applications with a focus on shipping, the port and the food industry contributes an important know-how element towards the establishment of the competence centre and test region for hydrogen and fuel cell applications. Thanks to its existing infrastructure, the saline Weser and the special properties of the water from the harbour basins – as well as the local experience and knowledge of offshore wind energy and of working under offshore conditions – Bremerhaven offers the best conditions for the development of seawater electrolysis. This will raise the profile of Bremerhaven as a location and give its scientific institutions and companies a head start in terms of know-how. In addition, Bremerhaven aims to make the location more attractive for the settlement of new companies and institutes as well as the long-term support of the “green” initiatives “Green Economy” and “greenports” with the goal of creating a CO2-neutral port location and promoting CO2-neutral transport chains. The image of Bremerhaven as a climate city will also be strengthened.

The activities in Bremerhaven focus on the development of water treatment and material flow management as well as life cycle assessments to evaluate environmental impacts and the recycling capabilities of seawater electrolysis plants. Aspects of plant construction and regulatory conditions for the building and operation of seawater electrolysers are further focal points of research. The use of electrolysis in shipping, in the port and in the food industry plays a special role for Bremerhaven, and brings with it specific requirements which are incorporated into the electrolyser development.

Excerpt from the results report on the High-Tech Strategy 2025 of the Federal Government:
In order to help hydrogen production and applications to achieve a breakthrough in Bremerhaven, the State of Bremen and Germany, the establishment of a special economic zone (SEZ) was proposed for Bremerhaven. As originally envisaged in the national hydrogen strategy for the whole of Germany, a levy exemption for hydrogen (e.g. EEG subsidy) is to be tested in Bremerhaven over a period of 10 years. This could provide a fundamental impetus for the development and implementation of a hydrogen infrastructure covering ports and ships and ranging from the sea to the maritime hinterland.

Due to its port economy and maritime logistics chains, as well as being a wind energy location, the City of Bremerhaven offers a unique landscape of players and expertise to link and exploit hydrogen technologies and to create a model region, with a special focus on coastal infrastructure. In addition, the urban area is well demarcated by its insular location in the State of Lower Saxony. The short distances within the city offer added benefits.

Research, development and innovation projects in hydrogen and fuel cell technology are interdisciplinarily and directly linked to renewable energies and sector coupling. The various federal ministries offer funding programmes with different focuses. The classification of projects in the funding framework must be specifically agreed in each case.

The NOW GmbH National Organisation for Hydrogen and Fuel Cell Technology coordinates and manages the National Innovation Programme for Hydrogen and Fuel Cell Technology (NIP) of the Federal Government and also the Funding Guidelines for Electric Vehicle Charging Infrastructure (LIS) of the Federal Ministry of Transport and Digital Infrastructure (BMVI). On behalf of the BMVI, NOW also supports the further development of the Mobility and Fuels Strategy (MKS).

Funding programmes of the State of Bremen and BIS are not focused primarily on hydrogen and fuel cells or the energy turnaround, but are classified into investment, innovation and environmental funding as well as various tenders.

Further funding of the Federal and EU programmes 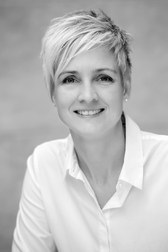